The Games of the XXIX Olympiad were a major multi-sport event that took place in Beijing, China from August 8 to August 24 2008. 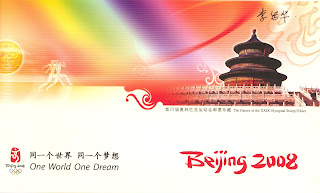 Mauritius won its first Olympic medal ever (bronze medal), secured by Bruno Julie in the bantamweight boxing semifinals.
The China National Philatelic Corporation also released a booklet to mark this event.  It portrays the Emblem of the Games 'Dancing Beijing'... 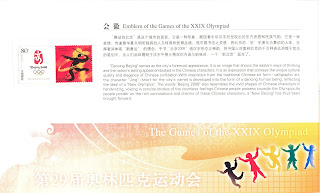 ... and the mascots of the 2008 Summer Olympics:  Beibei, Jingjing, Huanghuang, Yinyin, Nini. 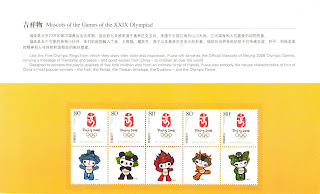 The mascots illustrate the 4 most popular animals of China - the Fish, the Panda, the Tibetan Antilope, the Swallow - and the Olympic flame.
Posted by David at 1:00 PM