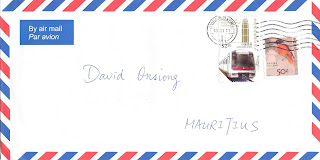 In 2010, Hong Kong commemorated the centenary of its railway service.  In this context, Hongkong Post issued a set of 6 stamps, each picturing a different model of train, in order to mark this major milestone.  The  $2.50 stamp featured on this envelope depicts what is called 'tube' in London, or underground railway;  it is the most widely used train in Hong Kong.
The 50¢ stamp on the right, which forms part of the 2006 birds definitive issue, portrays a scarlet minivet.
Thanks a lot Trudy for my first cover from HK! (:
Posted by David at 5:27 PM 2 comments:

The POS Indonesia issued on November 5, 2010 a lovely set of 11 postage stamps, with each stamp depicting an animal and a plant from Indonesia.  Five out of the eleven stamps are represented here:
1/11 - Nias Myna & Ylang-ylang
The Nias Myna (Gracula religiosa robusta), with its mainly purple-glossed black plumage, is a member of the starling family and is an endemic resident of Nias and other nearby islands off western Sumatra.
Cananga odorata, commonly known as Ylang-ylang, is a tree valued for its perfume.  The essential oil derived from its flowers is widely used in aromatherapy.
2/11 - Sumatran Tiger & Sealing Wax Palm
The Sumatran tiger (Panthera tigris sumatrae), is the smallest of all surviving tiger subspecies.  It is found on the island of Sumatra and in 1998, 400-500 specimens were believed to exist.
The Sealing Wax Palm (Cyrtostachys renda) is a medium-sized palm with red bright stalks.  It is often grown in tropical regions for its pretty red colour and is native to the swampy areas of peninsular Malaysia and the island of Sumatra.
3/11 - Sun Bear & Corpse Flower
The Helarctos malayanus is a subspecies of the Sun Bear (Ursus malayanus).  It is endemic to the island of Borneo.
The Corpse Flower (Amorphophallus titanum) is a flowerinf plant with the largest unbranched inflorescence in the world.  It is called 'Corpse flower' due to its odour, which is reminiscent of a decomposing mammal.
4/11 - Belitung Island Tarsier & Nagasari Tree
The Belitung Island Tarsier (Tarsius bancanus saltator) ia and endangered subspecies of tarsiers.  It is found only on Belitung Island and its known populations are severely fragmented due to extensive deforestation.
The Palaquium rostratum, also known as Nagasari Tree, is a tropical tree native to Southeast Asia.  Its timber is used for furniture and panelling and its fruits are edible and the seeds are used to extract fat for cooking.
11/11 - Rusa Deer & Diospyros macrophylla
The Rusa deer (Cervus timorensis) are antive to the islands of Java and are easily recognised by their large ears.  if you get close to a free ranging Rusa deer ans spook it, it will let out an extremely loud honk: this a form of alarm.
The Diospyros macrophylla is a mid-canopy tree with yellow-cream flowers.  The wood is locally used for making sticks and knife handles.
Thank you very much Irene for this colourful cover from Malang! (=
Posted by David at 3:46 PM No comments: 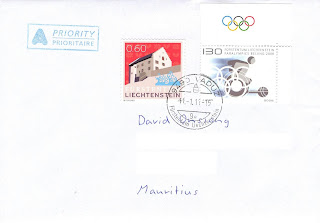 The 2008 Summer Paralympics, the thirteenth Paralympics took place in Beijing, China from September 6 to September 17, 2008.  Over 4200 athletes from 148 countries were expected to take part.  This was the largest ever number of nations at the Paralympics (12 more than in Athens), and several countries competed for the first time.
The Principality of Liechtenstein issued, in 2008, this stamp to mark this event.  It depicts a physically handicapped person on a wheelchair playing soccer.  Thank you Vural for sending this nice envelope, again from Vaduz.
Posted by David at 3:50 PM No comments:

Email ThisBlogThis!Share to TwitterShare to FacebookShare to Pinterest
Labels: Liechtenstein 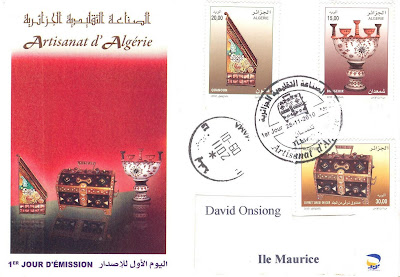 Algérie Poste issued this set of 3 stamps on Algerian Craft on November 28. 2010.  The stamps, designed by S. A. Bentounes, represent the:

Candle Holder (15,00 DA)
It is a candle holder in pottery from the region of Kabylia, made from clay.  It is particularly used in some Kabyle villages by brides during the wedding night.

Quanoun (20,00 DA)
The quanoun is a musical instrument made of wood and which includes sculptures and decoration.  The traditional North African quanoun has 17 maqamat (notes) for 51 strings. 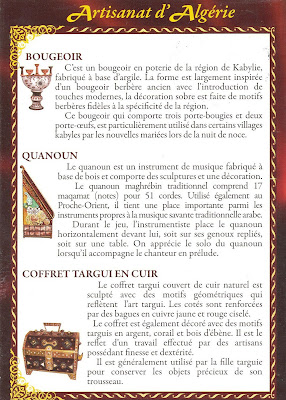 Leather Tuareg Box (30,00 DA)
The Tuareg box is covered with natural leather and is carved with geometric patterns that reflect the Tuareg art.  It is usually used by the Tuareg girl to keep valuables.

Email ThisBlogThis!Share to TwitterShare to FacebookShare to Pinterest
Labels: Algeria

The Great Charity Bridge in China 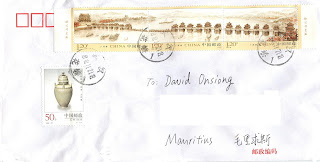 Thank you so much Huang for this wonderful set of 3 se-tenant stamps depicting the Guangji Bridge (广济桥), also known as the Great Charity Bridge.  It is an ancient bridge that crosses the Han River in Chaozhou, Guangdong province.  A key cultural relic under national protection, the bridge is renowned as one of China's four famous ancient bridges.
The Guangji was originally a pontoon bridge built in AD 1170 during the Southern Song Dynasty with a length of 518 metres.  Later, construction of piers and framework started from both banks of the river on which it was moored, and 200 years later the current form of the bridge, with a floating section supported by 18 wooden pontoons between two beamed sections, was completed.  The floating section can be disconnected for the passage of large boats, an innovation that set a precedent in bridge-building history.
The cover was sent on November 21, 2010 from Wuhan, Hubei and arrived on January 26, 2011.
Posted by David at 2:19 PM No comments:

"Primavera" by Sandro Botticelli and Notre Dame Cathedral in France 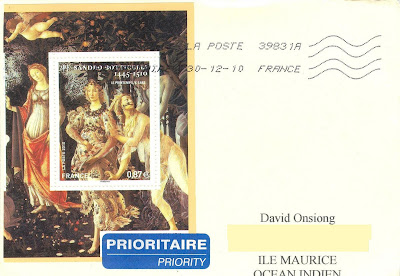 La Poste issued this souvenir sheet of two stamps, devoted to Sandro Botticelli (1445-1510), one of the greatest painters of the Italian Quattrocento, on November 4, 2010.  The issue coincides with the 500th anniversary of the painter's death in Florence in 1510.  It's his work entitled "Primavera", painted around 1482, which is reproduced here. This painting is without doubt one of his greatest masterpieces. 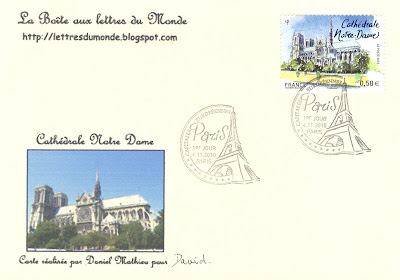 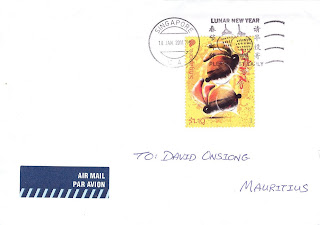 Thank you Terence for sending this fantastic cover with again a wonderful slogan postmark, but this time for the Chinese New Year...  :D  The $1.10 stamp was issued on January 7, 2011, together with 2 other stamps, to mark the Year of the Rabbit 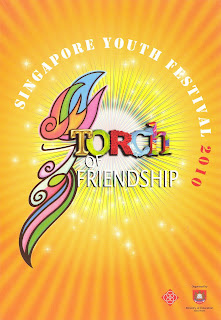 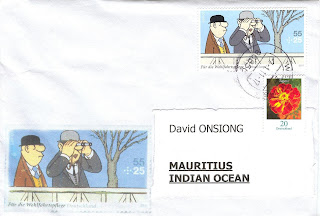 Loriot (Vicco von Bülow) is a famous German cartoonist who created the cartoon dog Wum, also known as The Talking Dog.  This cover, sent on January 7 fom Wemding, feautures one of the four Welfare stamps issued on January 3, 2011.  The stamp is about Wum on the racetrack (Auf der rennbahn).  Thank you very much Franz: it's my first mail from your country.
Posted by David at 2:59 PM No comments: 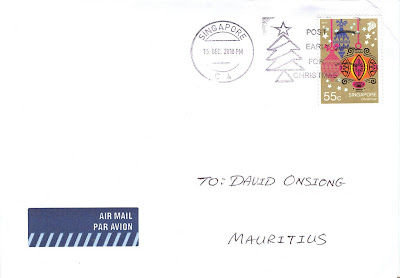 Thank you Terence for this cover with Christmas stamp and slogan postmark: Post early for Christmas, and which I received on January 28. 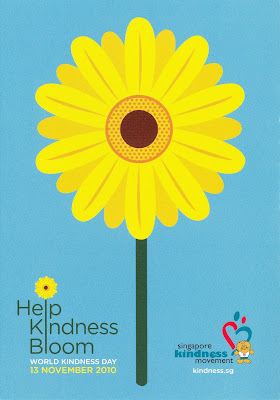 I wish a happy Lunar New Year to all of you, especially to my fellow friends from China!
Posted by David at 12:03 AM No comments: