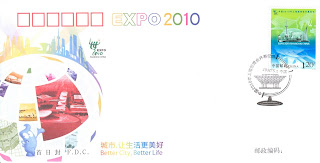 Today being the closing day of the World Expo, I seize this opportunity to publish a FDC I received from a relative a few weeks ago. 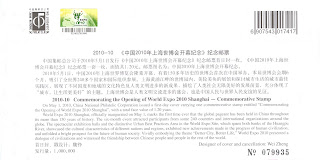 ﻿Expo 2010, officially Expo 2010 Shanghai China (simplified Chinese: 中国2010年上海世界博览会; pinyin: Zhōngguó Èrlíngyīlíng Nián Shànghǎi Shìjìe Bólǎnhuì), is being held on both banks of the Huangpu River in the city of Shanghai, China, from May 1 to October 31, 2010.  It is a World Expo in the tradition of international fairs and expositions.  The theme of the exposition is "Better City – Better Life" and signifies Shanghai's new status in the 21st century as the "next great world city".  The expo Logo features the Chinese character 世 ('world', Chinese "shì") modified to represent three people together with the 2010 date.  It has the largest number of countries participating and is the most expensive Expo in the history of the world's fairs.  The Shanghai World Expo is also the largest World's Fair site ever at 5.28 square km. 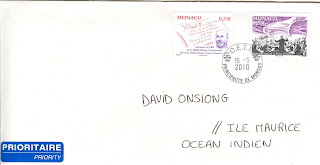 Email ThisBlogThis!Share to TwitterShare to FacebookShare to Pinterest
Labels: Monaco 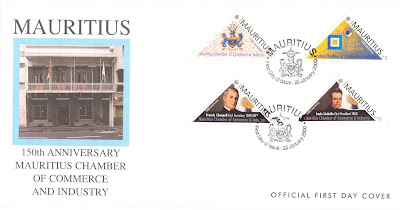 The Chamber was set in 1850 and is the oldest non-profit making institution of the Private Sector in the country.  Originally known as 'Chamber of Commerce', it took the name of 'Mauritius Chamber of Commerce and Industry' in 1965, at a time when Mauritius was moving towards independence and rapid industrialisation.

The R1 stamp illustrates the Coat of Arms of the MCCI.  The Chamber's motto, which appears on the Coat of Arms, is 'Non nobis. sed patrie', which means 'Not for ourselves, but for our motherland'.  The blue and yellow colours symbolise trust, confidence and optimism.

The Rs2 stamp symbolises new technologies and the perception of the Chamber for the future.

The Rs7 represents a painting of Mr. Francis Channell who was the first secretary of the Chamber from 1850 to 1872, year of his death.

The last stamp, of denomination Rs15, features Mr. Louis Léchelle: the first President of the Chamber, from 1850 to 1853.

The FDC illustrates the façade of the seat of the MCCI in Port Louis.
Posted by David at 4:25 PM No comments:

Email ThisBlogThis!Share to TwitterShare to FacebookShare to Pinterest
Labels: Mauritius 2000 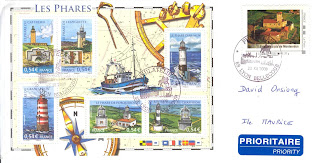 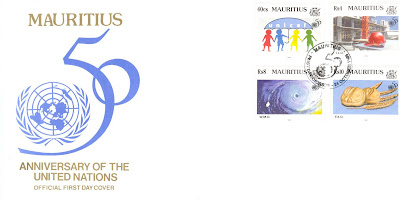 The 40cs stamp illustrates children protected by the United Nations International Children Emergency Fund (UNICEF) in the form of an umbrella. This Fund was founded in 1946 to meet the emergency of children in post war Europe and China for food, drugs and clothing.

The Rs4 stamp, which depicts a helmet, a crane and scaffolding representing safety and modernisation of operations at the workplace,  represents the aims of the International Labour Organisation (ILO) which are to enhance the quality of the labour force, protect the rights of workers, improve the working conditions and so on. 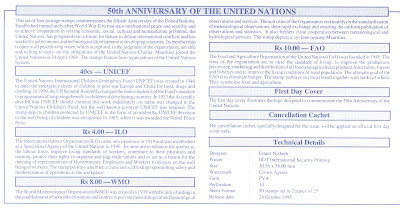 The Rs8 stamp portrays a cyclone nearing Mauritius; with relation to the World Meteorological Organisation (WMO), which was created in 1939 with the aim of aiding in the establishment of networks of stations and centres to provide meteorological and hydrological observations and services.

Finally, our local bread together with stalks of wheat on the Rs10 stamp symbolise food and agriculture.  The Food and Agriculture Organisation of the UN (FAO) was created in 1945 with the ultimate goal of eliminating hunger.

The FDC illustrates the logo designed to commemorate this special event.
Posted by David at 9:34 PM No comments: