Mauritius hosted from 7 to 17 August 2004 the 24th Summit of the Heads of State and Government of the Southern African Development Community (SADC).  To mark this event, the MPL issued 2 commemorative stamps of the Rs2 and Rs50 denominations. 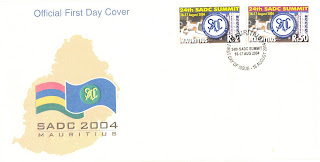 The SADC vision is one of a common future, a future in a regional community that will ensure economic well-being, improvement of the standards of living and quality of life, freedom and social justice and peace and security for the people of Southern Africa.

The SADC mission is to promote sustainable and equitable economic growth and socio-economic development through efficient productive systems, deeper cooperation and integration, good governance and durable peace and security, so that the region emerges as a competitive and effective player in international relations and the world economy.
The Honourable Paul Bérenger, Prime Minister of the Republic of Mauritius (2003-2005) assumed the chairmanship of SADC from August 2004 to August 2005.
The stamps show the logo of the SADC, the Cyber Tower at Ebène and I.T. training sessions.
The 13 member states of SADC are:
Angola, Democratic Republic of Congo (DRC), Lesotho, Malawi, Mauritius, Mozambique, Namibia, South Africa, Swaziland, Tanzania, Zambia and Zimbabwe.  SADC headquarters are in Gaborone, Botswana and the working languages are English, French and Portuguese.
Posted by David at 11:19 AM