The MPL issued a gold postage stamp of denomination Rs100 on September 18th 2010 to mark the 110th Birth anniversary of Sir Seewoosagur Ramgoolam (1900 - 1985).  This is the first time in Mauritius that the Rs100 denomination is released. 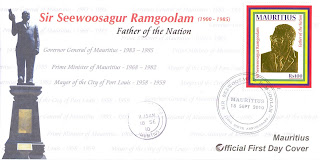 SSR is considered as the most outstanding personality in Mauritius.  Son of an indentured labourer, he became the first Prime Minister of Mauritius (1968 - 1982) after its independence in 1968.  He was also the Governor General (1983 - 1985) a few years before the island attained status of Republic.

The FDC illustrates the statue of Sir Seewoosagur Ramgoolam, located at Port Louis Waterfront.
Posted by David at 2:08 PM