By the end of the 18th century, there were frequent skirmishes between the French and the English naval vessels in the Indian Ocean.  After conquering the Seychelles (1794), Rodrigues (1794) and Reunion (1810), the British naval forces set sail to capture Isle de France (Mauritius). 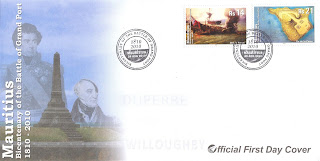 The French could hardly offer any resistance as there were only 4000 soldiers including 2000 reservists on shore...  The battle lasted for 5 days, the peak of the battle being on the night of the 23-24 August 1810 with serious casualties on both sides.  The British forces were defeated.  This battle was the only naval victory of the French over the British, under Napoléon Bonaparte.
The Rs14 stamp depicts the battle scene while the Rs21 one illustrates the Ile de la Passe, a fortified islet which controlled the entrance to the harbour and which the British took possession on the 14th of August 1810.
Posted by David at 11:36 AM