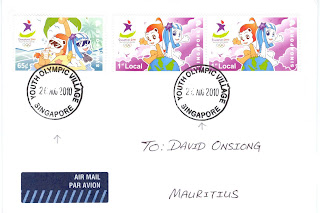 Singapore hosted, from 14-26 August 2010, the first Youth Olympic Games (YOG).  170 countries, including Mauritius, participated in this international event which features athletes aged between 14 and 18.  The Games were officially opened by the President of Singapore: S. R. Nathan, and its motto Blazing the trail.
Terence kindly sent me this nice cover from the Youth Olymoic Village (YOV) on August 26 (the closing day of the Games).  Both stamps portray the mascots of the Games Lyo and Merly, a fire-themed lion and a water-themed female merlion respectively.  Thank you very much Terence!
Posted by David at 9:34 PM