The Mauritius Post Ltd issued on 16 July 2009 a set of 4 postage stamps depicting the extinct giant tortoises of Mauritius and Rodrigues. 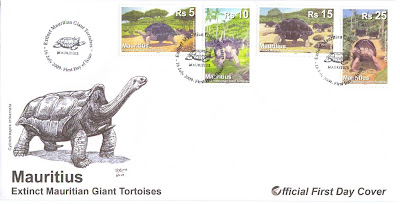 The Mascarene Islands of Mauritius, Réunion and Rodrigues once harboured 5 species of giant tortoises, with 2 occurring on Mauritius and 2 on Rodrigues.  The name Cylindraspis actually means Cylinder-shaped.  They differed from any other giant tortoise species, with modified jaws, reduced scales on the legs and shells averaging 1 mm thick.  The need for protective armour was no longer required because of the absence of predators on the islands.  With the arrivals of humans in the 16th century and the subsequent introduction of domestic animals, especially pigs, the tortoises were rapidly hunted to extinction.

Rs5 - Cylindraspis peltastes (Rodrigues Domed Tortoise)
The difference in the shell shape of the Rodrigues giant tortoises is a result of different feeding strategies.  The smaller domed tortoise was a grazer, feeding on low vegetation, and lacked the distinctive saddle found in the larger species.  This provided an opportunity for the 2 species to coexist.  Rodrigues populations of giant tortoises were the largest on earth and early accounts report that the hills appeared to be paved by their shells.

Rs10 - Cylindraspis vosmaeri (Rodrigues Saddleback)
The saddleback tortoises had really long, flexible necks, much more than any other giant tortoise.  The upturned saddle in the shell was an adaptation to maximise the stretching of the neck.  As they could reach up to 1.4 metres to browse on low trees and shrubs, many Mascarenes plant species have developped a defence strategy called heterophylly, where low-lying juvenile foliage is a different shape from the adult leaves.  The tortoises do not recognise the juvenile leaves as food.

Rs15 - Cylindraspis inepta (Mauritius Domed Tortoise)
Early accounts suggest tortoises were laying their eggs in sand or soil near beaches.  They buried their eggs before abandoning them and relied on heat from the sun to incubate the eggs.  This made them very vulnerable to introduced predators.  The Mauritius domed tortoise was much larger than its Rodrigues counterpart and had an unusual extension to the back of the shell.

Rs25 - Cylindraspis triserrata (Mauritius Saddleback)
The shells of the giant tortoises were open-ended.  This was a specific adaptation in response to the lack of predators, where thick, heavily armoured shells were no longer necessary.  Unfortunately, the thin shells were of no protection against human colonists and mariners, and thousands were collected alive for provisioning ships.  Even more were boiled down for their valuable oil, which provided a cure for many ailments including scurvy. 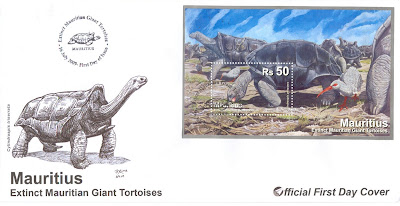 The Mauritius Post Ltd also issued, besides the 4 postage stamps, a miniature sheet showing a reconstruction of the Rodrigues Domed Tortoise and the Rodrigues Saddleback together with Rodrigues Blue Rail Erythromachus leguati .  The extinct blue rail, a bird known from historical accounts to feed on tortoise eggs, also probably followed the tortoises, feeding on disturbed insects and plucking parasites from their skins.  The blue rail became extinct just 30 years after being considered common in 1726, probably due to the introduction of rats and cats. 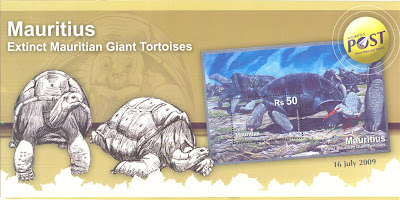