The mountains of Mauritius are what remain of the immense volcanoes whose summits have exploded or have been swallowed by abysses millions of years ago.  They are of relatively modest height and they command rather than attract attention because of their unusual shapes and often scraggy contours.  The appearance and location of some of the mountains have resulted in some quaint naming by discoverers and travellers giving free rein to their imagination. 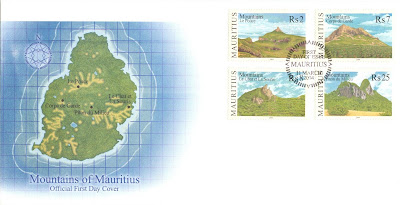 The highest mountain of the island is the Piton de la Petite Rivière Noire which stands at 828 metres high.

Clench your fist with the thumb raised and its upper outline is exactly that of the Pouce Mountain as seen from Port Louis.  The thumb of this petrified giant's hand points to the sky in the Moka Range.  It is very popular amongst hikers and it can be climbed to its highest point of 811 metres from Port Louis, Moka and Saint Pierre.

The Corps de Garde Mountain resembles a figure with an impressive nose lying down...on sentry duty.  It is solidly bulky and overlooks Quatre Bornes and Rose Hill.  On a clear dawn the rays of the rising sun reflects a rosy hue on the basaltic rockface, hence, the origin of the name of the town of Rose Hill...

The peak of Le Chat et La Souris as the name conjures, bears a strange resemblance to a cat subjugating a rat.  It is found in Grand Port Range in the east of Mauritius.

The Piton du Milieu as the name implies simply squats, screwed down firmly, in the centre of the country.  It is striking although not a particularly high finger-like rock of 589 metres located about 7 km east of Curepipe.

The FDC illustrates a map of Mauritius showing the location of the mountains.
Posted by David at 8:13 PM