The MPL released on April 11 2010 a special commemorative cover, affixed with 2 stamps of the Indigenous Flowers definitive set, to celebrate the birth centenary of Renganaden Seeneevassen, a famous politician whose father was an immigrant from South India and his mother a Mauritian Tamil lady. 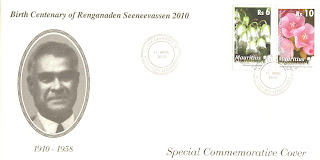 In 1935 he left Mauritius to read Law in England  and returned back in 1940 as a barrister.  He joined the Labour Party and became one of its influential leaders.  As a distinguished orator and with exceptional leadership attributes, he passionately argued the case for universal suffrage and against proportional representation, which he believed would divide the country.  His dream was a true Mauritian nation without discrimination of race or creed.
In 1957, as the first Mauritian Minister of Education, he introduced a new Code of Education which for the first time ensured a fair and equitable educational system.  Renganaden Seeneevassen is remembered for his kindness, compassion and selfless determination to improve the conditions of his countrymen.
He passed away on 5th June 1958, ten years before the independence of Mauritius.
Posted by David at 12:34 PM