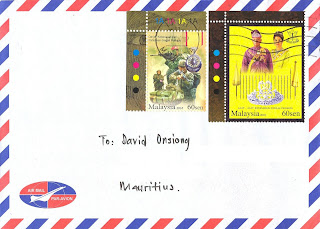 I received this colourful cover on November 16th which was sent from Ipoh, Perak on November 1st.  The yellow stamp on the far right depicts the Sultan of Pahang and was issued on 24 October 2010 with 2 other stamps on the same theme 'Royal Heritage'.
The other stamp illustrates soldiers in action and was issued on 31 July 2010 along with 2 other stamps too on the theme 'Grand Knight of Valour'.  Thank you very much Khor!  :)
Posted by David at 12:07 PM