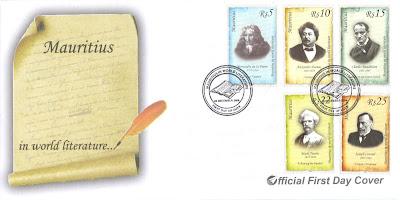 Here is one of the most beautiful set of stamps ever issued in Mauritius!  The Mauritius Post Ltd issued this set of 5 postage stamps on 8th December 2008 to highlight the presence of Mauritius in World Literature.  Five of the world's renown novelists who wrote on or visited the island between the 18th and 19th centuries have been portrayed, namely:

Jacques Henri Bernardin de Saint Pierre is a renown author and novelist of 18th century France for his novel Paul et Virginie which he wrote in 1789 having been inspired by the enchanting environment of Isle de France (Mauritius) during his stay in 1768.

Alexandre Dumas (Davy de la Pailleterie) père, one of the world's most versatile writers and novelists, of mixed origin, his father of French nationality and his mother of African slave ancestry, is a gifted genius with a prolific style and author of a series of novels depicting the French heroic times.  His novel Georges (le mulâtre) published in 1843 has for background Mauritius.

Charles Baudelaire is one of the most prolific writers and poets of 19th century France.  On hids way to India, his sailing vessel stopped over in Port Louis in September 1841, he found the island and its inhabitants awe-inspiring and wrote a sonnet for a charming lady, entitled A une Dame Créole.

Samuel Langhorne Clemens better known by his pen name Mark Twain born in Florida on the 30th Novembr 1835 is one f the most important figures in American literature and one of th greatest humorists.  Through his humour and his shrewd power of observation, he immortalised 19th century life.

The author of Tom Sawyer, came in Mauritius in 1896.  In his book entitled More Tramps Abroad or Following the Equator xpublished in 1897, he wrote "... you gather the idea that Mauritius was made first and then heaven and that heaven was copied after Mauritius".
(It should be noted however that this phrase was taken out of its context)

Joseph Conrad is one of the most famous British novelists of polish origin of his true name Teodor Josef Konrad Korzeniowski.  He started his career as a sailor in the French Navy, as such made a stop over in Port Louis for 2 months and 1888 where he fell in love with a Mauritian girl who refused him marriage.  He was for long considered as the greatest living novelist.  His tale A Smile of Fortune was inspired by his visit to Mauritius which he described as "a pearl distilling sweetness upon the world".

Email ThisBlogThis!Share to TwitterShare to FacebookShare to Pinterest
Labels: Mauritius 2008