Achievements in the 20th Century

The Mauritius Postal Services issued a set of 4 commemorative stamps on 7th December 1999 to highlight the main achievements of Mauritius during the 20th century. 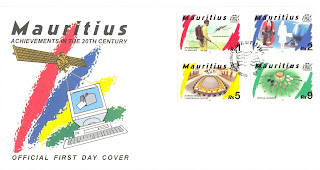 The stamps denominations are as follows:
R1 - Eradication of malaria, a deadly disease transmitted by the Anopheline mosquito,

Rs5 - Construction of the International Conference Centre at Grand Bay,

Email ThisBlogThis!Share to TwitterShare to FacebookShare to Pinterest
Labels: Mauritius 1999