South Africa hosted, from June 11 to July 11 2010,  the XIXth edition of the FIFA World Cup.  Nine countries, out of the fourteen of the Southern Africa Postal Operators Association (SAPOA), marked this historical event (it was the first time the African Continent was hosting the FIFA World Cup) by a joint issue.

The Mauritius Post Ltd issued, on 9th April 2010 a set of 3 First Day Covers, with three stamps affixed on each, illustrating the national flag of each country. 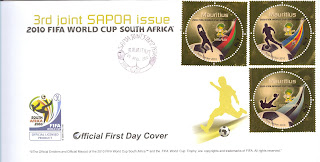 The design of the stamp features a graphic image of soccer players in action, a soccer ball, the national flag of each country and last but not least: Zakumi - the official mascot especially designed for the World Cup in South Africa.  The name 'Zakumi' is a composition of 'Za' standing for South Africa and 'kumi', which means '10' in various languages across Africa. 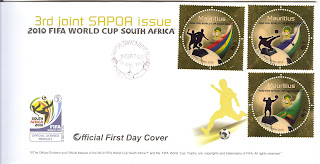 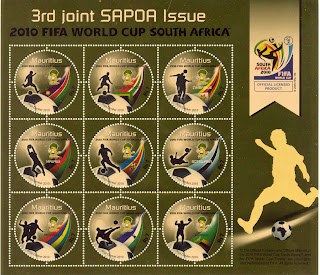