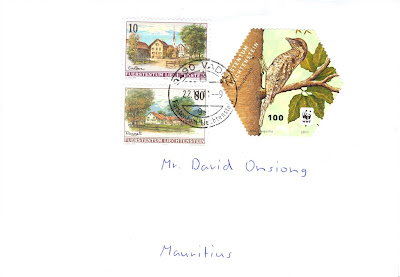 Here's another nice mail from Vaduz.  He used two stamps from the 1996 and 1999 'Villages' series, illustrating the villages of Eschen (CHF 10) and Ruggell (CHF 80) respectively, both in the north of the Principality.

Vural completed his postage with another stamp from the WWF set issued in 2011 to mark the 50th anniversary of the organisation.  So after the Hobby, here comes the Wryneck (Jynx torquilla).  This bird got its English name from its ability to turn its head almost 180° when it feels itself threatened. This odd behaviour lead to it being used in witchcraft to put a "jinx" on someone.