The Mauritius Post issued on May 17, 2012 a set of ten Special Commemorative Covers to mark the 40th Anniversary of the Establishment of Diplomatic Relations between the Republic of Mauritius and the People's Republic of China. 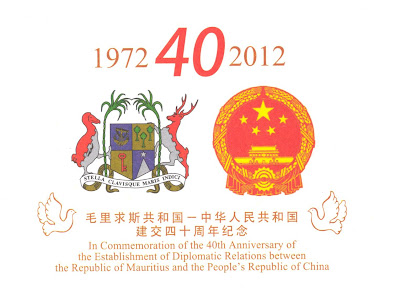 Diplomatic relations between the Republic of Mauritius and the PRC were formally established on 15 April 1712.  During his historic visit to China in 1972, Sir Seewoosagur Ramgoolam (SSR), the then-Prime Minister of Mauritius, signed a Joint communiqué with Chinese Premier, Zhou Enlai, that opened a new and decisive chapter in the relations between the two countries. 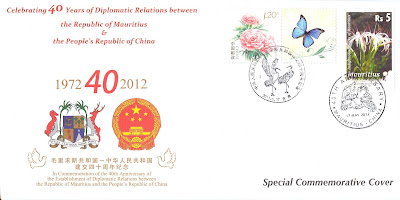 Since the formalisation of the relations, China has been steadfastly supporting Mauritius as its very close and trusted friend and development partner.  China has indeed extended to Mauritius substantial development cooperation package in the form of preferential loans, in addition to technical assistance, capacity-building and training opportunities and a wide range of ad hoc sponsorships and support in various socio-economic initiatives.

This excellent and special relationship has been constantly nurtured by regular exchanges of high-level visits.  Dr. Navin Ramgoolam, the present Prime Minister of Mauritius undertook official visits to China in 1997 and 2007.  Mauritius was greatly honoured by the landmark state visit of His Excellency, Mr. Hu Jintao, President of the PRC, in Mauritius in February 2009. 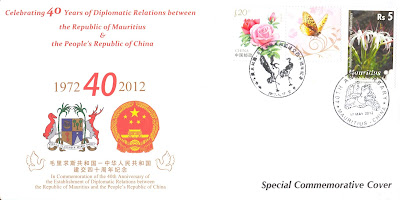 Mauritius is very proud that an economically dynamic and culturally vibrant section of its population is of Chinese descent and contributes significantly o the human and cultural diversity that make up the Mauritian population which annually celebrates the Chinese Spring Festival. 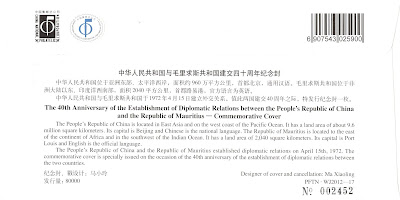 Forty years of relations, built on the principles of sovereign equality of states, peace, cooperation and mutual respect and mutual benefit, are an irreversible sign of the healthiness and maturity of such relations.  More importantly, they are a solid foundation for elevating them to higher planes.