Centennial of Scouts of China in Taiwan 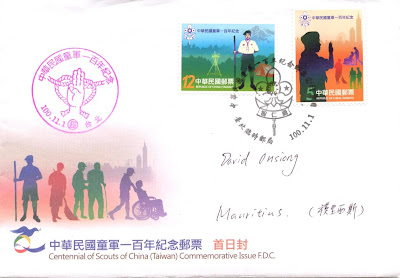 Chunghwa Post commemorated the Centennial of Scouts of China by releasing a set of 2 stamps on November 1, 2011.
Organised scouting in the Republic of China began in 1912 under the leadership of Rev. Yen Chia-Lin of the Boone Memorial School in Wuchang, Hubei.  The movement later spread nationwide.  On November 1, 1934, the General Association of the Boy Scouts of China(changed in 1997 to the General Association of the Scouts of China, GASC) was formally established and admitted to the World Organisation of the Scout Movement in 1937.
In 1990, the Association registered in the Ministry of Interior of the Republic of China on Taiwan as a civic organisation.
NT$5 - The stamp features silhouettes of boy scouts saluting, doing social work or helping others.  These images of scouts showing concern for society demonstrate the scout pledge "to practise a good turn everyday".  The city skyline in the background shows the advanced development of Taiwan. 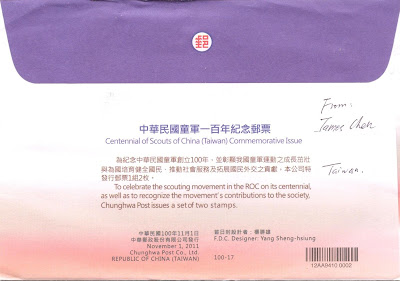 NT$12 - To demonstrate how scouts learn and build character through fun activities, the stamp features the image of a boy scout, a tent and a watchtower in in an outdoor setting that is typical of camping.  With forest and the main peak of Mount Jade depicted in silhouette in the background, the stamp conveys the magnificence of Taiwan's mountains and forests.
The emblem of the GASC is featured on the upper left-corners of both stamps and on the First Day Cancellation.  The second first day cancellation - on the left - represents the three-finger salute and a scouting knot.

Email ThisBlogThis!Share to TwitterShare to FacebookShare to Pinterest
Labels: Taiwan