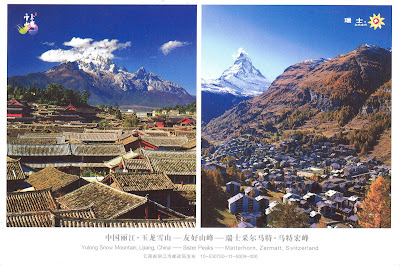 Thank you very much Xu for this nice postcard, sent from the eastern city of Suzhou. Jiangsu Province.  It shows the sister peaks Yulong (玉龙雪山 - 5596 m), also known as the Jade Dragon Snow Mountain, near Lijiang, southwestern China, and Matterhorn (马特峰 - 4478 m), also called Mont Cervin in French or Monte Cervino in Italian, in Zermatt, Switzerland. 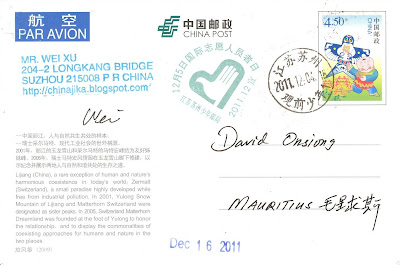 The two mountains were designated as sister peaks in 2001.  In 2005, the Switzerland Matterhorn Dreamland was founded at the foot of Yulong Snow Mountain to honour the relationship and to display the commonalities of coexisting approaches for humans and nature in the two places.
Mailing date: 04 DEC 2011
Delivery date: 16 DEC 2011
Posted by David at 10:22 AM