Queen Victoria in the UK 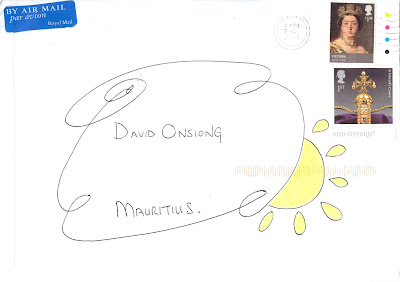 The last Stuart monarch, Queen Anne died on 1 August 1714 without issue.  Her German second cousin, George I, of the House of Hanover, who was a descendant of the Stuarts through his maternal grandmother, Elizabeth, daughter of James VI, succeeded her.   George I was succeeded by George II, George III, George IV, William IV and Victoria.  Kings George IV and William IV passed away without surviving any legitimate children, thus leaving the throne to the only legitimate child of the Duke of Kent, Victoria, the last monarch of the House of Hanover.
To commemorate these monarchs, the Royal Mail issued a set of six stamps and a miniature sheet on September 15, 2011, covering the Hanoverian era from 1714 to 1901. The last stamp (face value £1.10) of this series, depicting Queen Victoria (1837-1901), is featured on the cover above.
The second stamp (1st class) is from the 'Crown Jewels' series - issued on 23 August 2011 - and represents St. Edward's Crown.
Thank you very much Nigel! :)