The Endangered Hobby in Liechtenstein 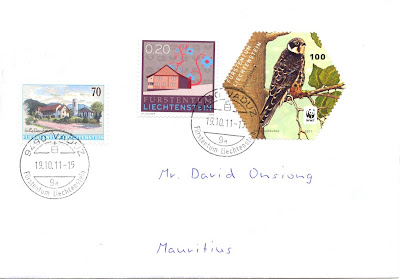 To celebrate the 50th anniversary of the WWF, Philatelie Liechtenstein issued on 9 September 2011, eight se-tenant hexagonal stamps (face value CHF 1.00) each depicitng an endangered bird species of Liechtenstein.  Vural franked his cover with the stamp depicting the Hobby (Falco subbuteo), a fast-flyer bird of prey.  It has long sharply-pointed wings, blue-black upper parts and feeds on other birds and large insects, especially dragonflies (the hobby eats the insects on the wing).
Vural also used a stamp (CHF 0.20) of the 'Brand Liechtenstein' definitive set, showing the Community Lifestyle Museum and released in 2009, and another one (CHF 0.70) of the 'Views of Villages' set issued in 2001, showing the village of Schellenberg, northern Liechtenstein.
Thank you Vural for this cover mailed from Vaduz, the capital city of the Principality of Liechtenstein.
Mailing date:  19 OCT 2011
Delivery date: 25 OCT 2011
Posted by David at 9:57 AM