50th Anniversary of the Royal Shakespeare Company in the UK 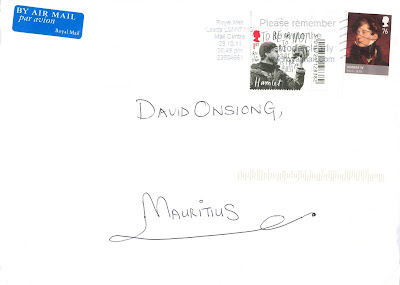 To mark the 50th anniversary of the name change of the Shakespeare Memorial Theatre Ltd., the Royal Mail released on 12 April 2011 a set of 6 stamps and a miniature sheet.  The aim of the organisation - now known as the Royal Shakespeare Company - has been, since its foundation in 1875, to connect people with Shakespeare's plays.
The 6 stamps  represent iconic RSC productions of Shakespeare's plays.  Nigel affixed the 1st class stamp on his mail; it shows former Dr. Who David Tennant as Hamlet in 2008, with the legendary phrase: "To be or not to be, that is the question" featured.  The other stamps designs and denominations are as follows:
○The Tempest - 66p
○Henry VI - 68p
○King Lear - 76p
○A Midsummer Night's Dream - £1.00
○Romeo and Juliet - £1.10
The second stamp (76p) on the envelope was to commemorate King George IV (1762-1830) , from the House of Hanover series.
Thank you very much Nigel! :)  This cover was sent from Leeds Mail Centre where a slogan postmark is applied: "Please remember to write the postcode clearly.  www.royalmail.com".
Mailing date: 29 October 2011
Delivery date: 10 November 2011
Posted by David at 5:24 PM