As from today and till the 12th of August, London will be the centre of the World. Indeed, the 2012 London Olympics start today.  Over 10,000 athletes from 204 countries, or rather National Olympic Committees, are expected to compete in this event, considered to be the world's foremost sports event. 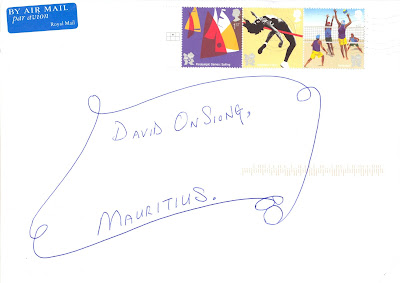 Thank you Nigel for these nice Olympic stamps issued on 27 July 2011.  The concept of the Royal Mail was to issue 30 stamps (10 in 2009, 10 in 2010 and 10 last year) to mark the 30th Olympiad.  The above stamps illustrate, from left to right: Paralympic Games Sailing, Athletics Field and Beach Volleyball.
Mauritius is taking part in six sports, namely: athletics, boxing, judo, road cycling, triathlon and beach volleyball.
Good luck to all the participating sportsmen and women!
Faster, Higher, Stronger!
Mailing date: 13 February 2012
Delivery date: 22 February 2012
Posted by David at 6:56 PM