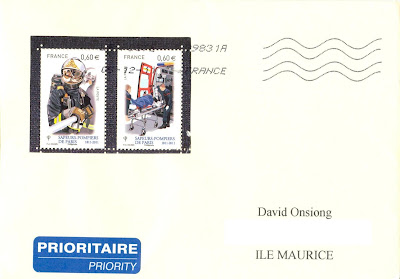 The Battalion of Paris firefighters was founded on 18 September 1811 by Emperor Napoleon I, following a devastating fire at the Austrian Embassy, where a ball was being held, which killed a hundred people.  The Battalion is now known as the Brigade des Sapeurs-Pompiers de Paris (acronym: BSSP/ English: Paris Fire Brigade).  The mission of the BSSP ranges from containing fires in Paris to dispensing first aid following accidents.
To commemorate the bicentenary of the BSSP and the remarkable work accomplished by its, La Poste released for general sale on September 19, 2011, a souvenir sheet consisting of 10 €0,60 stamps. Part of this S/S was used to frank the mail above. The stamps represent a firefighter holding a water cannon (left) and two others embarking an injured person in one of their emergency vehicles (right). 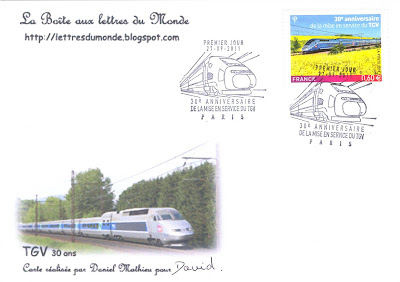