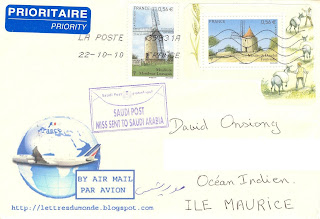 Another nice cover from France to share with you!  Daniel sent it to me on October 22, and it arrived only on November 29, after traveling around the globe for more than 1 month!  It has 2 beautiful windmill stamps affixed on it with the right one depicting the Moulin de Daudet Fontvieille and the other stamp illustrating the Moulin de Montbrun-Lauragais.  Thanks a lot Daniel!!  :) 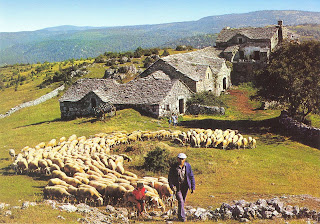 As I mentioned above, this cover made a detour to Saudi Arabia by mistake...  It's interesting to note the mention 'Miss sent to Saudi Arabia' made by Saudi Post so as to notify the error. 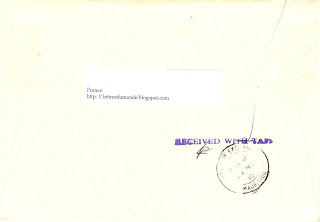 When the cover arrived at the Office of Exchange, located at the Plaisance Airport, the Mauritius Post notified that the envelope was received with tape which is not visible on the photograph and which was used to consolidate the flap.  The Office of Exchange postmark is not very legible, but I deduce it is dated 26 November 2010
Posted by David at 1:52 PM