The MPL issued a set of 4 postage stamps on February 4th, 2006 to mark the bicentenary of Mahebourg, a village in the South East of Mauritius. 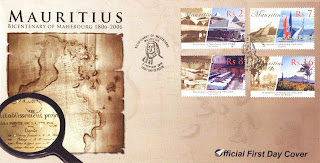 The stamp depicts the old African-style market, now demolished, and the new one with its elegant pastel shades and slender pillars.  People of the region flock to this market renowned for its butchery products; the place is moreover a bustling meeting centre where shopping goes with socialising.
Rs7 - Regattas

The stamp features the regattas, old and new, a very particular feature of the seaside village.  This activity was created, among others, to draw popular attention to Mahebourg, in the 19th century, at a time where it was losing some of its attraction to the profit of inland towns. 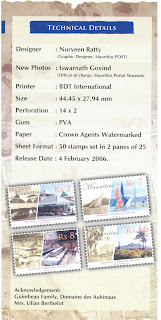 The stamp shows the picturesque lavoir or washing place, one of the rare specimen of the kind to be still in use.  Dating from the French period, that is the early days of the creation of Mahebourg, it is situated close to La Rivière La Chaux.  The iron rings fixed in the cut stones recall that horses were tied here while the washing was being done.
Rs16 - Pointe des Régates

The stamp illustrates the Pointe des Régates, past and present.  This is the place where boat racing started.  La Montagne du Lion, a mountain that takes its name from the shape of a lion's head at its summit, can be seen in the background. 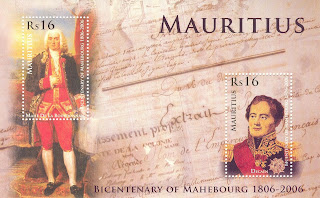 A souvenir sheet was also released.  The s/s consists of 2 stamps with the left one portraying Mahé de Laboudonnais, French Governor of Isle de France (1735-1740) and whose name was given to Mahebourg, and on the left, the successor of Laboudonnais (1803-1810): Isidore Decaen, who created Mahebourg.
Posted by David at 8:19 PM