To mark the 1999 World Post day, the MPS issued a Special Commemorative Cover on October 9th, 1999. 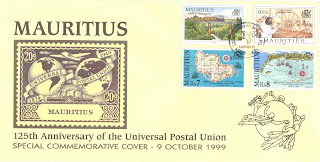 
The SCC was also issued to celebrate the 125th anniversary of the Universal Postal Union, which, you all know, was founded on October 9, 1874.  The SCC also features the 20cs stamp issued by Mauritius in 1974 to commemorate the 100 years of the UPU.
Posted by David at 7:52 PM

Email ThisBlogThis!Share to TwitterShare to FacebookShare to Pinterest
Labels: Mauritius 1999