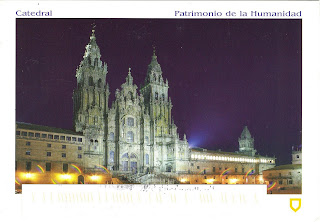 Santiago de Compostela is the capital of the autonomous community of Galicia in Spain. and the cathedral is the main attraction in the city.  In 1985 the city's Old Town was designated a UNESCO World Heritage Site. 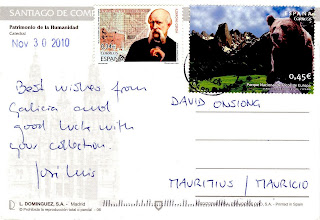 Two nice stamps on the verso of the postcard:  the large one shows the National Park of Picos de Europa which forms part of Spain's natural areas, and the other one portrays Ildefons Cerdà, a Catalan urban planner who designed the extension of Barcelona called "Enlargement" or "Eixample".
Muchas gracias José Luis!  :-)
Posted by David at 3:29 PM

Email ThisBlogThis!Share to TwitterShare to FacebookShare to Pinterest
Labels: Spain