My First Cover from Jersey 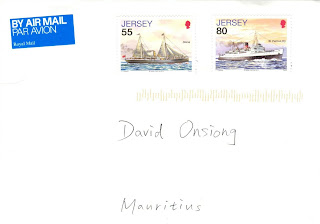 Jersey is a British Crown Dependency off the coast of Normandy, France.  The UK is constitutionally responsible for the defence of Jersey, which is not part of the European Union.  The capital of Jersey is Saint Helier and its official languages are English and French.
Thanks a lot James who managed to send me this awesome cover from this island! ;-)  Unfortunately, there is no cancellation cachet applied on the stamps, hence I don't know exactly when it was sent., but it arrived on November 25.  The stamps depict the Diana and the St Patrick (III)
Posted by David at 1:04 PM

Email ThisBlogThis!Share to TwitterShare to FacebookShare to Pinterest
Labels: Jersey