The Mauritius Post issued on October 12th, 2004 a set of 4 postage stamps to mark the 2nd anniversary of the Rodrigues Regional Assembly.  Rodrigues is a dependency of Mauritius and is 560km east of Mauritius, its capital city being Port Mathurin.  In 2006. Rodrigues had 40,000 inhabitants. 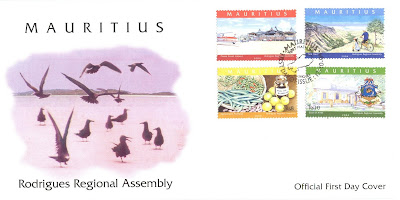 Rs10 - The coat of arms of Rodrigues

The FDC illustrates the birds on Ile aux Cocos which is a designated bird sanctuary.
Posted by David at 1:30 PM