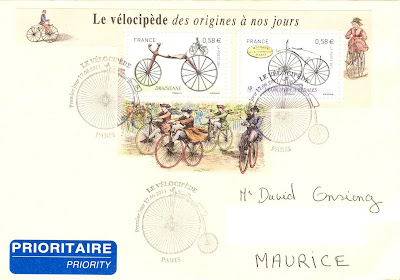 La Poste issued on June 20, 2011 an interesting miniature sheet on the velocipedes, from the origins to present.  The 6 stamps on that miniature sheet each portray a distinct type of velocipede (or bicycle if you prefer).  Two of these stamps are affixed on that cover sent by Daniel from Paris with first day cancellation.


The "draisienne" (or dandy horse) was created by the German Karl Drais in 1817 and is considered as the forerunner of the bicycle.  This two-wheeled vehicle did not have pedals and was propelled by the rider pushing along the ground with the feet as in regular walking or running (!)

Then were created the "michaudines", by Pierre Michaux in 1861, which were the first pedal bicycles ever manufactured!  However the front wheel of such velocipedes then became larger than the rear wheels. (can you notice it on the stamp on the right?) 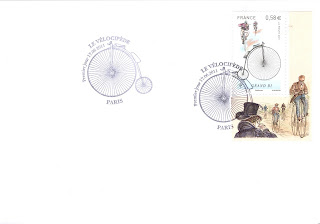 Nonetheless, more was to come with the "Grand Bi" (Penny-farthing).  Its front wheel was so high and exaggerated and the rear wheel so small that this type of bicycle was and is still very unsafe.  It is for that specific reason that the Penny-farthing was condemned later on. (I still wonder how can people ride such bicycles... 0.o)
Merci beaucoup Daniel! :)
Mailing Date: 17 June 2011
Delivery Date: 4 July 2011
Posted by David at 12:07 AM