2012 Olympics and Paralympics from the UK 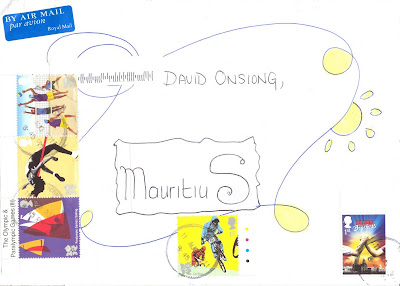 The concept is to issue 30 stamps to mark the 30th Olympiad and London 2012 Paralympic Games. Each of the sporting areas celebrated in these Games will have its own stamp and each of the 30 stamps will be created by a different contemporary artist, illustrator or designer.  The first set of 10 was issued in 2009, the second in 2010, and the third on July 27 last.
Thank you Nigel who affixed the Cycling stamp from the 2010 issue and the Paralympic sailing, Athletics field and Beach volleyball stamps from  the 2011 set on the lovely cover above.  Note that the logo for the 2012 Paralympics is slightly different form the Olympics one.
Mailing date: 11 August 2011
Delivery date:  18 August 2011
Posted by David at 6:20 PM