The 2010 World Fencing Championships in France 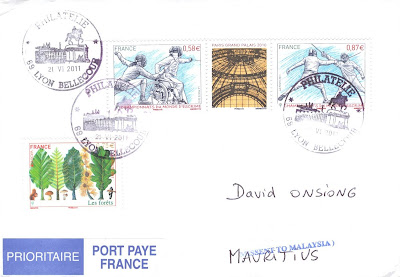 The 2010 World Fencing Championships were held at the Grand Palais in Paris from 4 to 13 November.  It was the fourth time that the City of Paris was hosting the World Championships.  A record number of 950 athletes from 110 countries took part in this competition.
La Poste issued on October 25, 2010 a set of 2 gutter pairs stamps to mark this event.  The 0, 58€ stamp (left)  portrays a disabled athlete in a wheelchair while the 0,87€ stamp illustrates two bodied athletes fighting.  The impressive glass vault of the Grand Palais is illustrated on the gutter.
The postage was completed with the 0,75€ Europa stamp issued by France, the Europa theme this year being the International Year of Forestry.  Note that this cover was missent to Malaysia.
Thank you Eric! -_-
Mailing date: 21 June 2011
Delivery date: 7 July 2011
Posted by David at 10:32 PM