The Mauritius Post issued on June 30 last a set of 4 stamps to commemorate various Anniversaries and Events for the year 2011. 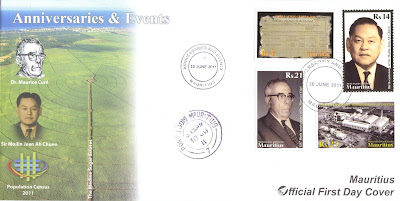 Rs7 - Population Census
The 18th population census was carried out in the Republic of Mauritius from  20 June to 31 July 2011 by the Central Statistics Office.  At the census, everyone is asked the same questions on the same day (the Census Night) to produce a unique set of facts and figures about the nation.  The Census Night was fixed on 03-04 July 2011.
Besides telling how many people live in the Republic and their characteristics, the census provides baseline information to determine what types of services they need now and are likely to need in the future.  It helps the Government and local authorities to allocate funds, decide future policy and plan important services such as transport, housing, health and schools.
The population count in 1735 was around 800 inhabitants and in 2011, this number reached 1,303,717.  The stamp illustrates the census form of XIX century.
Rs14 - Birth Centenary of Sir Moilin Jean Ah Chuen (1911-1991)
Sir Moilin Jean Ah Chuen was born on February 22, 1911 in Port Louis and played a very active and significant role for more than 50 years in thecommerce and industry, and in the socio-economic, cultural and political development of Mauritius.

In 1948, Sir Moilin was elected President of the Chinese Chamber of Commerce of Mauritius.   He became captain of the Mauritius Home Guard Contingent, as part of the country's defense structure during the World War II.

Sir Moilin was also appointed as a Nominated Member of the new Legislative Assembly in 1948, was elected in the 1963 and 1967 general elections and became Minister of Local Government in 1969.

He was knighted by Queen Elizabeth II in 1980 in recognition of his immense contribution in the field of political and public services, and made Knight of St. Gregory by the Vatican in 1991.  The Rs25 banknote also bears his hand engraved portrait.

Rs21 - 125th Birth Anniversary of Dr. Maurice Curé (1886-1977)
Dr. Maurice Curé was born on September 3, 1886.  In 1921, Dr. Curé got involved in politics and in 1936, he showed his will to serve the working class, advocating for constitutional reforms and denouncing exploitation and injustice.

In the same year, he launched an island wide campaign appealing for unity among the workers which culminated ina public gathering meeting organised at the Champ de Mars and attended by around 30,000 workers.  This marked the foundation of the Labour Party.

The following year, Dr. Curé and other leaders of the party were imprisoned following a general strike which affected almost all the sugar estates of the country.  The Hooper Commission instituted after the general strike, highlighted the needs for reform in favour of the workers and paved the way for the establishment of Trade Unions and the creation of a Labour Department.

From a company engaged solely in sugar production, it has diversified its activities in the middle of the last century in livestock. cattle, stag rearing, vegetable cultivation, farming, leisure and property development.