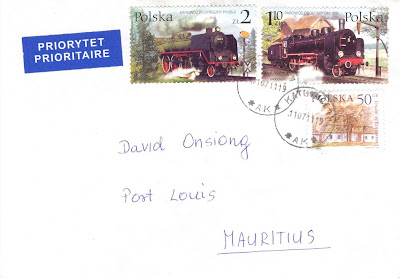 Poczta Polska released on September 21, 2002 a very nice set of 4 stamps on the Historic Steam Locomotives of Poland.  Waldemar sent me 2 of the 4 stamps:
zł2 - Pm 36 is the name for a Polish experimental fast steam locomotive used by PKP (Polish State Railways). designed in 1936.  One year later two of these locomotives were built, one of whom (Pm 36-2/ Beautiful Helena) survived the war and was operated until 1965.

zł1,10 - Ok1-359 is a passenger locomotive (parowóz osobowy in Polish) built in Louis Victor Robert Schwartzkopff's factories in Berlin in 1917.  It survived World War II and is now in service in Wolsztyn, a town in western Poland, since March 1989.
The 50gr stamp shows the Mansion in Łopuszna, a small village in southern Poland.
Thx a lot Waldemar for this wonderful cover - my first - from Katowice, Poland. (=

Email ThisBlogThis!Share to TwitterShare to FacebookShare to Pinterest
Labels: Poland