Hi everyone! I'm back! :)  A little Souvenir Cover to get started...
This year the World Customs Organization has dedicated the theme "Knowledge, a catalyst for Customs excellence" to commemorate the International Customs Day celebrated on 26th January, 2011.  This is in tribute to the critical role knowledge plays in enhancing the effectiveness and efficiency of Customs administrations across the globe. 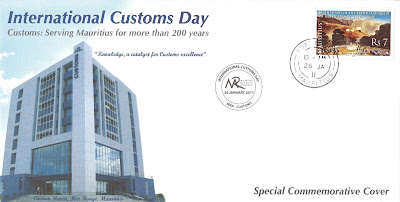 In Mauritius, International Customs Day 2011 coincided with the official relocation of the Customs department under one roof at the Customs House.  The year 2011 also marks a significant landmark in the history of the department.  Though according to the Mauritius Archives, a Bureau des Douanes (Customs Office) was set up in 1797, the present department dates back to 1811 with the British takeover and the nomination of Christopher Teesdale as first Collector of Customs.  The nature and function of the institution was significantly transformed in the 19th century with the department operating as a typical Custom House of the British Empire.
The department has played a significant role in the country's development, not only as a revenue raising institution, or in business facilitation but also in maintaining public health through the prohibition of imports of dangerous drugs, narcotics and other substances, in the control of pests and animal diseases as well as in wild life preservation through exports prohibitions.  It also played an ever increasing role in safeguarding the intellectual property rights.
In 2004, The Mauritius Revenue Authority (MRA) was established as an agent of the State for the management, operation and administration of Revenue laws. MRA became fully operational with effect as from the 1st July 2006 and it integrated the Customs department in a unified revenue collecting structure.
The Customs department has moved to a new and state of the art building at Mer Rouge.  Through its architectural design and organizational set up, the Custom House symbolizes a commitment to modernity and enhancement of knowledge.  It houses a modern training school and a fully equipped documentation centre/ library.  The new building will also house a small museum retracing the history of Customs in Mauritius from the colonial era to the post-independence period.
Technical Details
Event: International Customs Day
Release Date: 26 January 2011
Design: Nitish Peechen
Cover Illustration: New Customs House, Mer Rouge
Stamp: Rs7 of the Bicentenary of the British Conquest of Isle de France issue (2010)
Posted by David at 11:43 PM