James the Red Engine & Joe90 from the UK 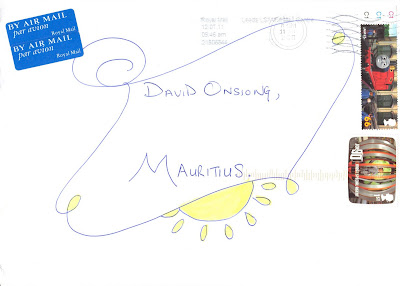 Next is a lovely cover from the United Kingdom.  Thx Nigel for enabling me to talk about so memorable British children's characters. =)
Royal Mail kicked off the new year with another issue - on January 4 - playing on nostalgia of 60-somethings - the Genius of Gerry Anderson.
In 1961 the ITV network broadcast a revolutionary new puppet show called Supercar.  Frustrated by the primitive technology of previous puppet shows producer Gerry Anderson had devised a new kind of animation called Supermarionation.  This featured much more technically sophisticated puppets that were able to lip-synch dialogue while the problem of locomotion was solved by the simple expedient of putting the characters into vehicles for much of the show.
Combined with a fast moving sci-fi plot and plenty of special effects the show become an instant success and launched Anderson’s career.  Anderson was to produce five more iconic Supermarionation shows during the decade that followed before moving into live action TV with UFO, The Protectors and Space 1999.
Joe 90 is a late-1960s British science-fiction television series documenting the exploits of a nine-year-old boy, Joe McClaine, who embarks on a double life as a schoolboy turned spy when his scientist father invents a pioneering machine capable of duplicating and transferring expert knowledge and experience to another human brain.
Royal Mail also issued on 14 June 2011 a set of 6 stamps and a miniature sheet to commemorate the birth centenary of Reverend Wilbert Awdry, the creator of Thomas the Tank Engine.  The six stamps show Thomas and some of his friends from the TV series, namely: James (affixed on the envelope above), Percy, Daisy, Toby and Gordon.
It was while his two-year-old son Christopher was suffering with measles that Wilbert tried to enliven his son’s bed-bound quarantine by telling stories and drawing pictures about a group of little engines.  He wrote down the stories and in May 1945 ‘The Three Railway Engines’ was published.  Between 1945 and 1972, Reverend Awdry wrote 26 volumes in ‘The Railway Series’.
James the Red Engine is a fictional locomotive from The Railway Series children's books and the spin-off TV series Thomas and Friends.  James is a mixed-traffic engine, which means he is just as capable of pulling coaches as trucks.  James first appeared in the Railway Series in 1946, in the book Thomas the Tank Engine.  Two books in the series, no. 3 James the Red Engine and no. 28 James and the Diesel Engines are dedicated to James.
Mailing date: 11.07.11
Delivery date: 22.07.11
Posted by David at 7:00 PM