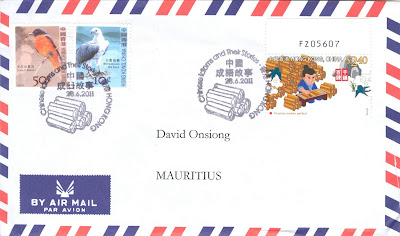 A Chinese idiom (Chengyu, 成语) is a traditional expression, most of which consist of 4 characters.  There are about 5000 Chinese idioms and their meanings usually surpass the sum of the meanings carried by the four characters, as idioms are often intimately linked with the myth, story or historical fact from which they were derived.  As such, Chinese idioms do not follow the usual grammatical structure and syntax of the modern Chinese spoken language, and are instead highly compact and synthetic.
Hongkong Post released on June 28, 2011 a set of 5 stamps on 5 different Chengyu.  It's the $2,40 stamp which Trudy sent to me on this nice FDC with the First day cancellation.  The illustration on that stamp matches perfectly the idiom "Practice makes perfect", with that guy practising hard his calligraphy.
Trudy completed her postage with the White-bellied Sea Eagle and the Scarlet Minivet stamps from the 2006 definitive set.  Thank you! (:
Mailing date: 28 June 2011
Delivery date: 13 July 2011
Posted by David at 9:55 PM