My First Cover from Mexico 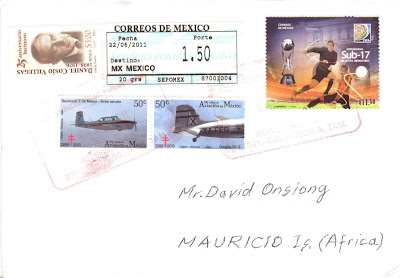 Thx a lot Pablo for sending me my first cover from your country. :-)  He first used two 50c stamps released in 2010 to mark the centennial of aviation in Mexico.  The Beechcraft T-34 Mentor (left) is a propeller-driven and single-engined military trainer aircraft.  The Douglas DC-3 (right) on the other hand is an American fixed-wing propeller-driven aircraft whose speed and range revolutionized air transport in the 1930s and 1940s.  Its lasting impact on the airline industry and World War II makes it one of the most significant transport aircraft ever made.  Many DC-3s are still used in all parts of the world.

Mexico hosted from 18 June to 10 July 2011 the FIFA U-17 World Cup (Copa Mundial Sub-17 de la FIFA México 2011 in Spanish).  Mexico won the cup, being the first team to achieve it as hosts defeating Uruguay 2-0 and managing their second title in the category.  Correos de México hence issued a nice set of 3 stamps (above) on June 15, 2011 to mark this event.
The last stamp portrays Daniel Cosío Villegas (1898-1976) who was a prominent Mexican economist, essayist, historian and diplomat. This stamp was issued in 2001 to commemorate the 25th anniversary of his death.
Special thx again to Pablo for that nice cover and the awesome stamps enclosed! :)
Mailing date - 5 July 2011
Delivery date - 12 August 2011
Posted by David at 11:07 PM