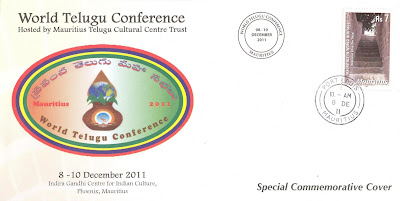 The Mauritius Telugu Cultural Centre Trust along with the Mauritius Andhra Maha Sabha and the Telugu Speaking Union are hosting a World Telugu Conference in Mauritius from 8 to 10 December 2011.
Telugu as a language is of Dravidian origin, borrowing heavily on Sanskrit.  During the middle ages the word Andhra became synonym with Telugu and Tenugu.
Telugu is the second largest spoken language in India after the Hindi.  It is also the mother tongue for several Telugus living outside Andhra Pradesh and India. 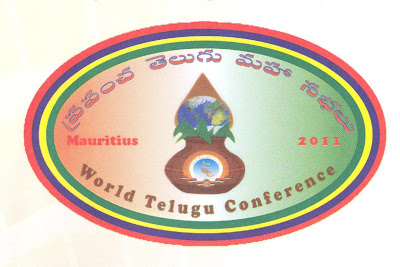 The last World Conference organised in Mauritius was in December 1990.  Since the first World Telugu Conference in April 1975, the Government of Andhra Pradesh has not organised any conference either in Andhra Pradesh or outside except for the one in Malaysia in 1981.
The 2011 conference is being held at the Srimathi Indira Gandhi Centre for Indian Culture located at Phoenix.  The subject for discussions will be on language, culture, traditions, arts and music.  Eminent personalities have been invited to make presentations.
Technical details:
Event: World Telugu Conference
Release date: 8 December 2011
Cover illustration: 2011 Conference Logo
Stamp: Rs7 (Aapravasi Ghat) of the Mauritius in World Heritage issue (2011)
Posted by David at 5:36 PM