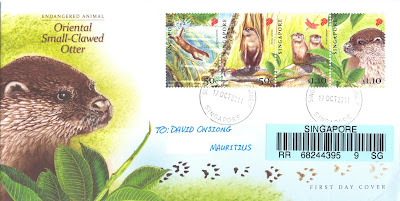 The Oriental small-clawed otter is the smallest member of these semi-aquatic carnivores, weighing less than 5 kg.  Singapore Post featured this mammal on a set of 4 se-tenant stamps released on June 3, 2011 and designed by Edmund Chen.

It inhabits mangrove swamps and freshwater wetlands, living in groups of about six or more animals.  This otter is distinctive for its forepaws, as the claws do not extend above the fleshy end pads of its toes and fingers.  These attributes give it a high degree of manual dexterity in using its paws to feed on molluscs, crabs and other small aquatic animals. 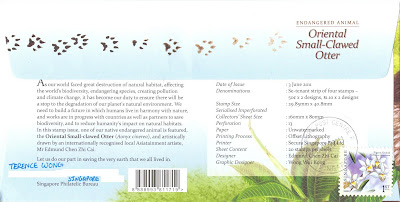 Due to ongoing habitat loss, pollution and hunting in some areas, the Oriental small-clawed otter is evaluated as 'vulnerable' on the International Union for the Conservation of Nature Red List of Threatened Species.

A big thank you Terence for this awesome FDC!  :-)