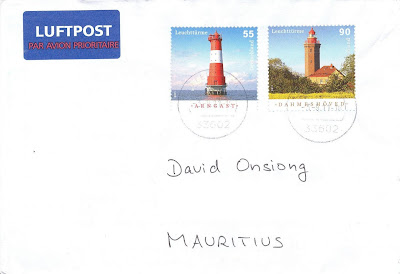 Deutsche Post issued on June 7, 2011 a set - the second for 2011 - of two special postage stamps depicting Arngast and Dahmeshöved lighthouses.  This issue is part of the "Bacon" series which aims to raise awareness of the diversity of German lighthouses.

55c - The Arngast lighthouse is located about 4.5 km away from South Beach.  Since its commissioning in 1910, this maritime signpost is in continuous operation.  The 36-meter-high lighthouse is part of the traffic safety system at the Jade.  Its white light has a range of 21.0 nautical miles (approximately 40 km).  In 2003 the Arngast lighthouse entered the list of Germany's cultural monuments.

90c - The Dahmeshöved lighthouse was built in the years 1878-1879 at the Bay of Lubeck in Schleswig-Holstein and was put into operation in February 1880.  The octagonal lighthouse is built of red brick and has a round iron lantern.  The building is approximately 29 m high.  Due to its location, a few metres above sea level, this lighthouse has the mounting height with 34 m above sea level.  Its white light has a range of 23 nautical miles (approx. 43 km).  The lighthouse is open for public since January 1, 2003.

Thank you very much Martin! :)