Today being World AIDS Day, I take this opportunity to share with you this FDC released by the Mauritius Post on October 9, 2011 in the context of World Post Day and to commemorate the 30th Anniversary of the Discovery of the Virus of AIDS. 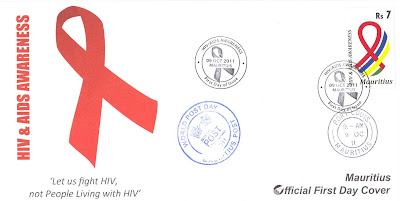 Mauritius has an estimated HIV prevalence of 0,97% among the adult population, of which 5030 cases are known according to July 2011 statistics.  An average of 35 new cases of HIV are being registered every month.  20% of the affected population are women.
The epidemic in Mauritius is driven by injecting drugs and is of a concentrated nature with prevalence as high as 47.4% among injecting drug users, 28.9% in commercial sex workers and 8.1% in men having sex with men. 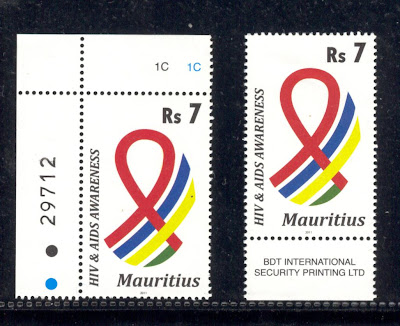 To address the epidemic, the National HIV and AIDS Stategic Framework 2007-2011 is being implemented.  It is geared towards universal access to prevention, care & support, with a particular attention to the prevention of new infection amongst our Most At Risk Populations.
Harm Reduction Programmes, namely the Needle Exchange Programme and the Methadone Substitution Programme for injecting drugs users have been put in place to contain the epodemic among people who inject drugs.  Treatment facilities are decentralised in regional hospitals and anti retroviral therapy is provided free of charge to people living with HIV.
Prevention being the only vaccine against HIV, information, education and communication campaigns are ongoing at community level and in the media.  An HIV and AIDS Act was passed in 2006 in order to provide a legal framework for the prevention and treatment of HIV, to protect the rights of people living with HIV and AIDS, and to eliminate all forms of discrimination against them.
A multi-sectoral approach has been adopted to fight HIV in the country.  The response engages in Government, NGOs, civil society and the private sector, and is led by the National AIDS Secretariat based in the Prime Minister's Office.

not people living with HIV."