The Mauritius Post released on 6 June 2016 a set of four stamps on the theme 'Freshwater Fauna'. The denominations are Re 1, Rs 10, Rs 18 and Rs 32. It is the first time that the Rs 32 denomination is released by the Mauritius Post; Rs 32 corresponds to the current local express mail rate for a letter weighing 20 grams or less (Rs 10 for standard priority delivery and Rs 22 for express delivery) 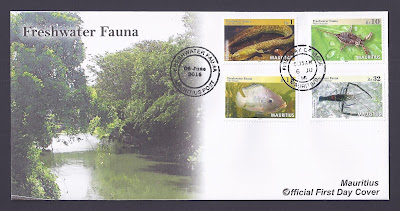 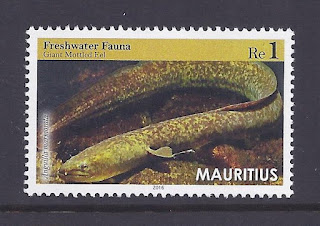 Anguilla marmorata has a robust body with a compressed rear part. It has a yellowish to olive or brown, mottled with dark greenish brown back with a lighter colouration belly.

This species can reach up to 2 m in length and is normally active at night, and feeds on prey such as crabs, frogs and fish. Eel is a highly commercial food fish and various life stages, ranging from juvenile to adult, are harvested and traded on a global scale for consumption, with current demand predominantly driven by East Asian markets, in particular Japan and mainland China.

The giant mottled eel is native to the Indo-Pacific region. This species is native to Mauritius and can also be found in Madagascar, Réunion and the Seychelles. It commonly dwells in rivers and lakes, including artificial ones, and reservoirs, and is found under crevices or hides under rocks.

Adult eels normally migrate to deep water in the sea where they breed and die. If they fail to find a way to the sea, eels can grow very big within the lake reservoir.

According to the International Union for Conservation of Nature (IUCN), it is considered Least Concern at present as there is no evidence for population decline. In Mauritius however, eels are now declining in number due to over-exploitation, reclamation of wetlands and marshy areas as well as pollution. 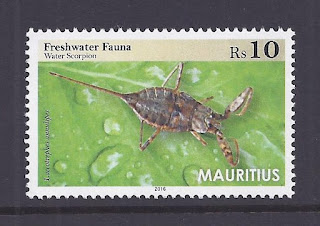 A species commonly found in streams, ponds, basins, etc, where it has been observed to prey on mosquito larvae and other aquatic animals. They are commonly called water scorpions due to their resemblance to scorpions.

They live in shallow, muddy water. They swim slowly, often crawling on objects in the water. They come to the surface for air and often hide under stones near water. They can reach about 6 cm in length but about half is the siphon.

Regarding vulnerability status - not known. It has been recorded all over the island of Mauritius in the past, but it seems to be difficult to find now. 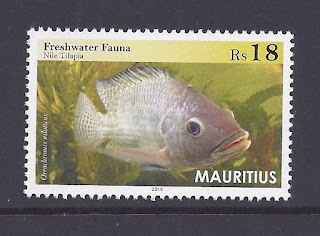 The Nile tilapia is native to Africa and the Middle East. It has a distinctive regular, vertical stripes extending as far down the body as the bottom edge of the caudal fin, with variable coloration. Adults reach up to 50-60 cm in length and up to 4 kg. It lives for up to nine years.

The Nile tilapia tolerates brackish water and prefers warm temperature. It is an omnivore, feeding on plankton as well as on higher plants.

This fish is currently one of the most important species in the aquaculture industry across the world. It is mainly due to its good flesh quality, disease resistance and high growth performance, acceptance to a wide range of feed and adaptability to the different methods of culture.

This species also feeds on mosquito larvae and is thus beneficial in the control of mosquito population.

In Mauritius, Oreochromis spp. was first introduced in the 1950s and was commonly found in water bodies such as rivers and reservoirs, mainly in Mare aux Vacoas and Mare Longue. Besides the Oreochromis niloticus normal colour, a Red Tilapia hybrid locally known as "berri rouge" also exists in Mauritius, which is a hybrid of three species of Oreochromis spp., introduced from Malaysia in 1990.

Seed production is being undertaken at the Albion Fisheries Research Centre (AFRC) under the aegis of the Ministry of Ocean Economic, Marine Resources, Fisheries, Shipping and Outer Islands to produce quality fingerlings to service fish farmers.

Fry are collected from broodstock ponds and cultured in tanks until they become fingerlings. Presently, the main investor in the culture of Oreochromis spp. is the private sector supported by the AFRC for hatcheries facilities. 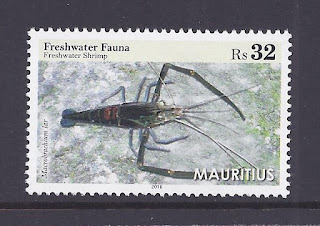 Commonly known as camaron, Macrobrachium lar can reach 8-10 cm in length. This large prawn has dark red-violet scales and long pincers and the female is smaller than the male. The eggs are carried by the female to brackish waters of estuaries where the juveniles will hatch and grow.

The young ones then migrate back upstream.

This prawn is found in well-oxygenated rivers throughout the Indo-Pacific region, usually hiding underneath stones. It is native to Mauritius.

According to the IUCN it is least concern. In Mauritius, freshwater shrimp is now rare due to overfishing and pollution.

Macrobrachium lar is considered a delicacy in Mauritius. It has never been intensively farmed but juveniles migrating upstream are captured and used to stock ponds.

In the 19th century, when the native orchid plant Cryptopus elatus was common along river banks, its roots were used to make a noose to capture river prawns, hence the name "liane camaron" given to that species of orchid. 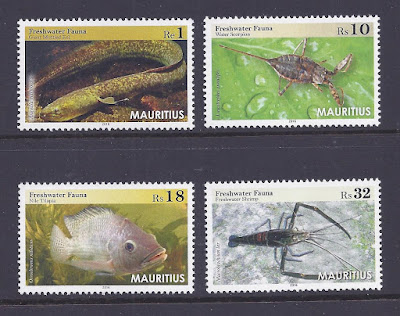 Email ThisBlogThis!Share to TwitterShare to FacebookShare to Pinterest
Labels: Mauritius 2016