To mark the first anniversary of the inscription of the Traditional Mauritian Sega on the UNESCO Representative List of Intangible Cultural Heritage of Humanity, the National Heritage Fund in collaboration with the Mauritius Post issued  a Special Commemorative Cover on 27 November 2015. 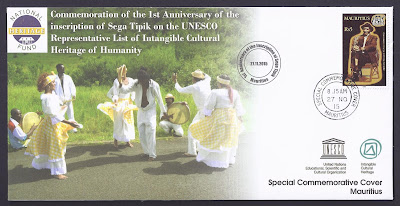 Born within the Creole community, sega tipik is a musical and dance expression that serves as a symbol of Mauritian identity. Mauritian sega is a unique performing art encompassing music, song and dance.

The traditional sega arose in the 18th century when African cultures converged in the context of slavery, providing enslaved people of Mauritius a measure of freedom and self-expression. After the abolition of slavery in 1835, sega tipik continued in Mauritian coastal areas where many former slaves moved to.

Some main elements characterising sega tipik include the dance, the music, the lyrics, but also the instruments, the context and the language.

The ensemble of the three traditional instruments: ravann (a frame drum), maravann (a rattle), triyang (the triangle), is the basis of the sega tipik.

Lyrics are sometimes improvised by a soloist in Mauritian Creole language. Themes include suffering, daily life or stories. Dance is performed by couples or one woman dancing with several partners in a circle formed by the musicians and the audience.

The context of the performance including generally the fire used to heat the ravann is also one of the elements forming integral part of the sega tipik. It was performed in various contexts and consequently there are various forms of traditional sega according to the context and occasion of performance.

The sega performance is an occasion to meet, share and socialise, creating a sense of community belonging, a means of social regulation and allowing social cohesion around a shared cultural practice.

Today, the "sega tipik morisien" is considered the de facto national dance and music of Mauritius. It is a symbol national identity and breaks cultural and class barriers, creating opportunities for intercultural encounters and unifying various groups around a shared Mauritian Heritage.

As of 27 November 2014, sega tipik morisien has been inscribed on the UNESCO Representative List of Intangible Cultural Heritage of Humanity.

Interestingly, sega is present in different variations all across south east Indian Ocean where slavery was in practice: sega tambour from Rodrigues, maloya from Reunion.

Ti frère who features on the Rs5 stamp on the Special Cover is a very famous Mauritian performer of sega tipik. His most famous songs include Papitou, Anita and Roseda. Other popular artists include late Michel Legris, Fanfan, Serge Lebrasse, Roger and Marie Josée Clency, Nancy Dérougère among others.

Text is adapted from the insert.

Video on sega tambour from Rodrigues: https://www.youtube.com/watch?v=v5jOe80XcFU (as from 7:09)

Video on maloya from Reunion: https://www.youtube.com/watch?v=Ww-w4BuWLQk
Posted by David at 10:06 PM