Ganga Talao is a natural lake located in Grand Bassin, Savanne district, in the Central Plateau.  It is an important place of worship for Hindus and a centre of pilgrimage especially during the Maha Shivaratree festival. 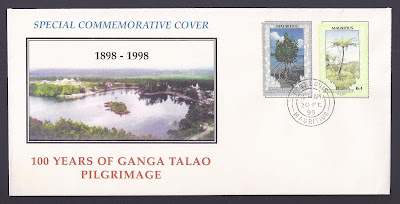 This lake of magnificent beauty with its pure, limpid water was chosen as a suitable site in connection with the Maha Shivaratree festival by a deeply religious priest of Triolet, Pamplemousses district, Pandit Jhummungeer Gossagne Napal, who officiated the first religious service at Ganga Talao.

According to existing records, a group of nine persons from Triolet led by Pandit Sajiwanlal Sharma undertook the first pilgrimage to Grand Bassin in 1898. It was a remarkable feat given that it took place under the harsh times of the Indenture system and without any proper access facilities to the Holy lake. The feat however ushered in a tradition which was to gather momentum and become a national event.

Every year now, between February and March (the exact date changes every year), pilgrims from all over Mauritius converge to Ganga Talao on foot, wearing white, symbol of purity. Some carry 'kanwars', colourfully decorated altars. Kanwars have highly varied in size and shape over the past few years, some even being fitted with wheels as being too heavy to carry by hand.

Once at Ganga Talao, pilgrims fulfil prayers and collect some water from the Holy lake. They then return home, still on foot, and pour the collected water onto their respective kovil's (Hindu temple) 'Shivalingam', a sacred stone representing Lord Shiva.

Volunteers serve refreshments and food along the way to pilgrims around the clock.

Email ThisBlogThis!Share to TwitterShare to FacebookShare to Pinterest
Labels: Mauritius 1998