To mark the bicentenary of the National Archives, the Mauritius Post released on December 7, 2015 a Rs 10 stamp. 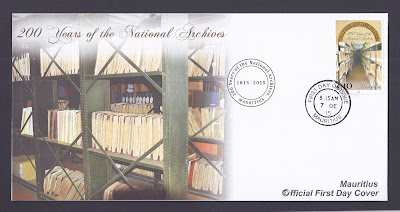 The National Archives of Mauritius is a public body operating under of the aegis of the Ministry of Arts and Culture. Although it has its origins from the early settlement in the island dating back to 1721 when the first French settlers came to Mauritius, then Isle de France, its official operation as an institution was proclaimed in 1815 during the British rule of the island.

The National Archives, besides being the main repository for housing records of national significance, is the guardian of such records and guarantees their authenticity. Its principal functions are to select, preserve and make accessible public records as reliable sources of evidence for historical, legal, financial, administrative, cultural, genealogical and other purposes. Users of these documents, at both national and international levels, include students, genealogists, individuals, historians, economists, scientists, researchers, journalists, notaries, tourists, organisations, government officials, other professionals and the public in general.

The holdings of the National Archives can be traced as far back as the beginning of Dutch settlement in the island in 1598, and now amount to more than 150,000 volumes in both manuscript and printed formats.

The national collection includes records of French and British administrations of the island, notarial deeds dating back to 1724, copies of maps and plans, stamps, currency notes and coins, minutes of proceedings of municipalities and district councils, lithographs, portraits, photographs, seals and private papers, civil status and census reports and reference library materials.

The Reprographic Section provides photocopy services and carries out scanning of records kept in the custody of the National Archives. 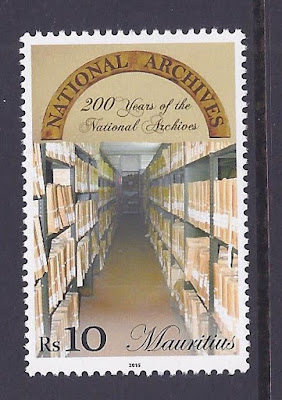 The National Archives has digitised part of its collections which date back to the 18th century, in order to make them accessible to its users via the internet. The online collection can be consulted on the following address: http://nationalarchives.govmu.org

The records of the French occupation of Mauritius were among the first set of records recommended for inclusion in the Memory of World Register in 1997 by UNESCO. These records form part of the key holdings of the National Archives collections. They document the French Colonial Administration on the island. The collections of records pertaining to Indian Immigration and slavery have also been extensively used in the preparation of the dossiers for the successful inscription and recognition of the Aapravasi Ghat and Le Morne sites on the Memory of World Register of UNESCO in 2006 and 2008 respectively. They are now known as World Heritage Sites.