The Royal Wedding in the UK 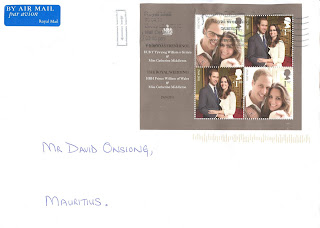 On April 29, 2011, HRH Prince William of Wales and Miss Catherine Middleton married at the Westminster Abbey in London.  Middleton wore a white dresser with a 270-centimeter train, by British designer Sarah Burton, as well as a tiara lent to her by the Queen.  Prince William wore the uniform of his honorary rank of Colonel of the Irish Guards. William's best man was his brother, Prince Harry, while the bride's sister, Pippa, acted as herer maid of honour.   The wedding was widely broadcast on television, internet and radio.  It is estimated that the coverage  was watched by two billion people worldwide.
Thank you Nigel for this awesome souvenir sheet, released on April 21, picturing the Royal couple official engagements photographs.  There's some Welsh written on it too: Y Briodas Frenhinol, EUB Y Tywysog William o Gymru & Miss Catherine Middleton, which means The Royal Wedding, HRH Prince William of Wales & Miss Catherine Middleton.  The stamps were unfortunately canceled on April 30. ):


All my wishes of happiness and longevity to the Royal couple
Posted by David at 1:36 PM