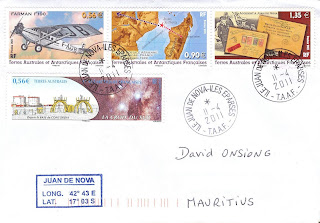 Thank you so much Eric for sending me this tremendous cover - my first - from Juan de Nova Island.  This tiny island is located in the narrowest part of the Mozambique Channel, between Madagascar and Mozambique.  It is one of the Scattered Islands in the Indian Ocean, a district of the French Southern and Antarctic Lands.
The 3 se-tenant stamps commemorate the plane crash which happened in the late 1920's in Juan de Nova.  In fact, on December 8, 1929, a Farman F 190, departed from the airfield of Ivato in Madagascar to Quelimane, on the Mozambique coast.  On board boarded three men: the captain Marcel Goulette, Chief Warrant Officer "René Marchesseau, and Staff Sergeant "Jean Michel Bourgeois".  A fuel leak forced them to land the aircraft on Juan De Nova.  The steamer "Gallien" retrieves them 3 days later, but Bourgeois stays on the island to monitor the aircraft.  He stayed two months, which allowed him to describe the island and to construct a makeshift runway.  On 28 January 1930, a boat brought back his two colleagues, and on February 1, 1930, the Farman F 190 could take off again towards Antananarivo in Madagascar.
The last, 0,56€ stamp pictures the Southern Cross (Crux) viewed from the Concordia base. 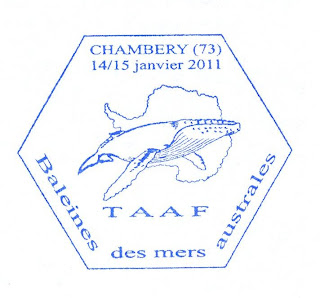 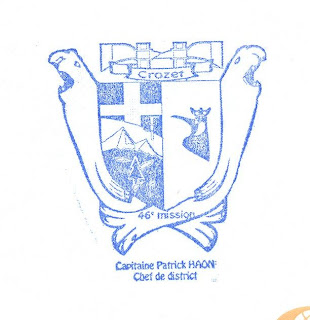