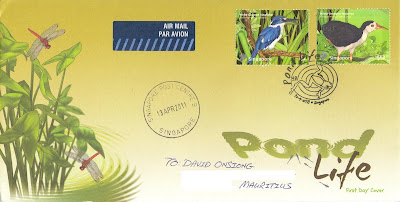 Singapore Post issued, on April 13, 2011, a set of 10 definitive postage stamps depicting a few of the commonly found life forms at a pond.  Three of those stamps are featured on that lovely FDC:

5¢ - White-Collared Kingfisher (Todiramphus chloris)
It is Singapore's commonest Kingfisher and feeds on various types of insects, shrimps, snails, worms, frogs, lizards, small fish and crabs.  Females tend to be greener than males while immature birds are duller than the adults with dark scaly markings on the neck and breast.

55¢ - White-Breasted Waterhen (Amaurornis phoenicurus)
It is the most common of the Rail family in Singapore and often heard before they are seen.  Their loud quarrelsome calls sound like their Malay name, Ruak Ruak.  They eat mainly seeds, insects and small fish. 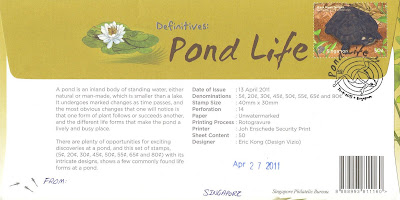 50¢ - Black Marsh Terrapin (Siebenrockiella crassicollis)
It is also known as the 'Smiling Terrapin' due to its upwardly curved jaw line.  It feeds on frogs, freshwater prawns, worms and snails.  The habitat of this secretive species extends from the vegetated shallow margins of the quiet streams to lakes and reservoirs.  The Black Marsh Terrapin is actually classified as 'vulnerable' due to habitat loss.