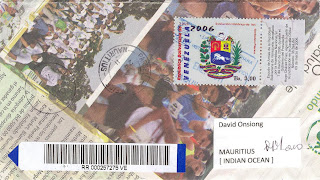 In March 2006, the Venezuelan National Assembly approved changes to the coat of arms and the flag, which were made ​​official on March 12, 2006, coinciding with Flag Day.  Prior to 2006 the horse was running, to the viewer, towards his right and looking back to the left.  In heraldic practice, animals and beasts are to appear facing to the dexter, which is considered the natural and honorable position.  The Economist observed that Hugo Chavez ordered the seal changed after his daughter had described the previous horse as "looking backwards."  Besides, both the legislative and executive branch agreed to add a machete as a symbol representing the peasant fighters during the revolutionary wars in Venezuela since the War of Independence, a bow and an arrow as a retribution to the brave indigenous population who resisted the Spanish conquistadors.  The new Coat of Arms is portrayed on this stamp issued in 2006.
Thanks a lot Jésus! =)  It's my first cover from your country.
Posted by David at 4:14 PM

Email ThisBlogThis!Share to TwitterShare to FacebookShare to Pinterest
Labels: Venezuela